Make your own damn breakfast 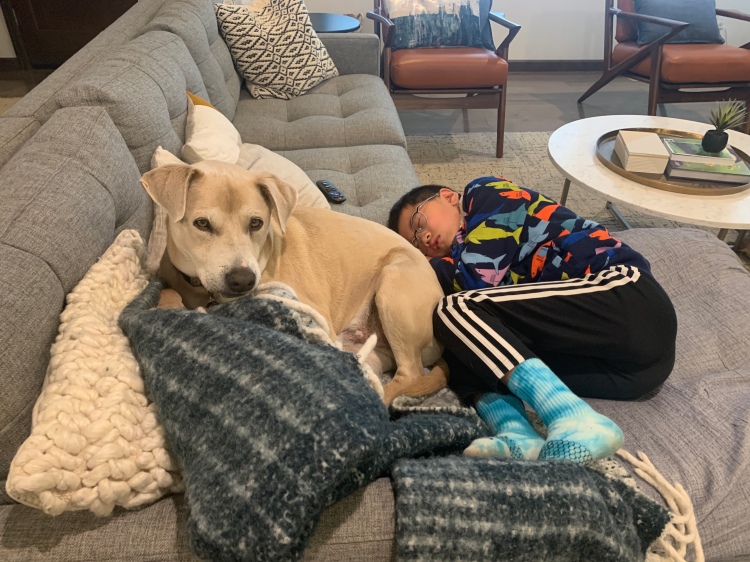 This morning, my eight-year-old son, Evan, woke me around 7:20, as he usually does. He then proceeded to sit in my room until I got out of bed, as he usually does. And then we went downstairs, with a parade of pets in our wake. Bini, who is nearly 12 and NOT a morning person, joined the line, complaining about something all the way downstairs.

Evan then went and sat on the couch. I was trailed by two fiercely meowing cats, who hate their cat food, and two dogs. Evan apparently mumbled something about what he wanted for breakfast, but amid the louder choruses, I missed it. So when I asked him a few minutes later if he wanted an omelette, he grumbled, “Never mind.”

We’re week six of homeschooling, being together 24/7 because of coronavirus. And yes, I see all the good things about staying home and staying safe. We protect each other. We protect front-line workers. We protect health care workers doing their life-saving work without adequate equipment. We are slowing down the virus spread, and slowing down our lifestyles. It’s been surprisingly welcome.

But my kids? I want to send them to an island.

After failing to read Evan’s mind about breakfast, Bini asked me for Ovaltine. I scoured the pantry and found only Swiss-Miss hot cocoa packets. Bini liked that idea, and from couch came a mournful: “I guess I won’t get any hot cocoa, then.” Evan, otherwise known as Eeyore. Still, I kept my cool.

Bini finished one bagel and asked for another. We are low on bagels, so I asked if I could make him eggs instead. “Sunny-side up,” he commanded.

From the couch, Evan called out: “I want eggs!” and so I asked Bini again: “Sorry – on toast?”

“I already told you three times!” Bini exploded. “Why can’t you open your ears and listen?”

And so, I put down my spatula and went upstairs. They could make their own damn breakfasts.

Steve and I came down a bit later and the kids were missing. We ate a very nice breakfast together, talking without interruption. Eventually, Evan emerged, still in a snit, and wearing the same too-short Adidas track pants he’s worn the past three days.

“Can you feed the dogs, please?” Steve asked him. Evan refused to speak. He still fed the dogs, but was apparently punishing us with his silence. If only he knew.

At 9:00, it was time to start the work his teacher had sent, and Evan’s wordlessness came to an abrupt halt. “I hate doing this!” he cried.

“It’s not my favorite, either,” I agreed. “But your teacher has sent this work, and we need to get it done.” I looked at the phonics worksheet. Dipthongs. I’d need to Google that. I looked around for the Chromebook we’d bought to homeschool during These Difficult Times. “Where’s the laptop?”

And that’s when I got up and went upstairs again. A few minutes later, I heard Evan making his disgruntled noises in the hallway. I cracked my door and found him lying on the floor, occasionally kicking the wall.

“Are you ready for me to teach you?” I asked.

And so I did the things that, recently, I’ve only been able to do when they’re both in bed: laundry, putting things away, answering e-mails, and writing this post. I felt very accomplished and efficient.

When I came downstairs and hour later, Evan had done his worksheets on his own, and was on the couch, napping with our dog. It wasn’t even 10:30 yet.

Tomorrow, we do it again.