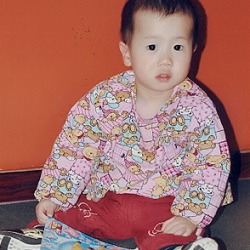 “Hi Kristin, this is Ashley at WACAP…kind of an interesting situation came up and I wanted to run some information past you. If you could give me a call back as soon as possible, that’d be great.”

It was one year ago today when I got that call. I was in the produce aisle of the Metropolitan Market in Kirkland, looking at Pink Lady apples and drinking a 12-ounce Americano. I was in workout clothes. I’d just been to barre3 class. And earlier that we had decided to decline our latest referral. It was number five.

When I saw our adoption agency’s number pop up on my phone that day, I put my phone back in my pocket and kept trudging toward the market. I was expecting yet another pep talk from Ashley, our adoption coordinator, about how we’d know when it was right, etc. But the whole process — reviewing children like they were dogs on Petfinder  — was becoming unbearable. I didn’t want to talk.

I don’t know why I checked my voicemail while choosing apples. But when I heard the message, it was like an electric shock. My stomach turned to ice, despite my hot coffee, and my hands started shaking. I parked my cart and dialed the phone. Ashley picked up on first ring. And she told me about a little boy named Xiao-Jie.

I can’t remember if I’ve described the process for Chinese adoption, and I’m too lazy to go back and read all of my posts to see. So here’s the deal: Families can either find a child, or they can wait to be matched. We went the latter route. Our first match was for a special-focus child, a little boy who’d been on the Shared List for several months without a match. These children usually have significant or complicated special needs, and are the most vulnerable.  For this little boy, we were given a month to make up our mind. Within that time, we requested (and received) medical updates that we then had reviewed by Dr. Julia Bledsoe at the University of Washington’s Center for Adoption Medicine.

Then, there’s the Shared List, maintained by the China Center for Children’s Welfare and Adoption. The list is shared with many adoption agencies, who can all see the same children’s files at the same time. Adoption agencies “lock” a child’s file for review for a specific family on their wait list. We were shown four such files between August and Nov. 19, and we declined all of them.

The problem with the shared list is the time element. Families have 72 hours from the time of a file lock to make up their minds and send a letter of intent. So if you have questions about a child, it’s very unlikely you’ll have the answers you want in time to make this momentous decision. That’s why we said no to those four other little boys: We didn’t have enough information. And to be fair, the Chinese government wants to find homes for these children. I understand why they have hard-and-fast rules. It’s just hard to make a decision about the rest of your life when you have 18-month-old medical information on a 3-year-old child.

Xiao-Jie was 2 1/2 when we heard about him a year ago. He was born with a cleft palate, and another family in our agency had just said no to him. They were heartbroken, but their 72 hours were up, and they hadn’t received their requested medical update in time. But between the time that they declined his file and his next appearance on the Shared List, the orphanage had sent his update. So when Xia0-Jie popped up, WACAP locked his file again. And called us.

I gave Ashley permission to send us the password-protected file, and finished my grocery shopping. I was still shaking, and my heart was thudding like I’d just run a race, but I willed myself to continue my errand as normal. Just finish up, drive home, and be calm, I told myself.

Before I drove home, I texted Steve: We got a new referral. It sounds really promising. Steve’s response: Already? We just turned one down. Me: Let’s keep an open mind. Him: OK. Let’s see how it looks.

My determination to stay cool lasted about two blocks. As I drove down State Street and passed the Kirkland Transit Center, I started crying uncontrollably. “Come on God,” I yelled to  my empty car. “Please let this be the one. We are good people, damn it! We are good parents! Please! Let him be the one!”

I opened the email from Ashley waited an interminable minute for the files to download. When I opened those first pictures, I knew — just as everyone said I would.

I’ve never had a biological child, but I imagine that moment when you see your new baby for the first time is not dissimilar to how it felt for me to see both of my children’s pictures for the first time. It’s such a specific mix of wonder, and awe, and trepidation, and exhilaration and so much fierce, wild love crashing like a wave. It took my breath away because I knew what it meant — I’d felt it once before, when I saw Bini’s picture for the first time.  I saw his face and his eyes and I knew with absolute certainty that I loved him, and wanted him more than I’d ever wanted anything.

I scanned Xiao-Jie’s medical files with baited breath: Cleft palate, repaired at 9 months, height (small), weight (small), developmental milestones. I looked at pictures of the palate repair. And then I called Steve.

Steve sounded hopeful, but still wary. Once again, the clock was ticking: It was 11 a.m. on a Friday, and we had to make a choice by Sunday. We couldn’t make a choice without a medical consult, and those were $450 a pop. We had already paid for several consultations, only to end up saying no. How many more times were we going to do this? One more, we agreed.

I called the Center for Adoptive Medicine repeatedly, and got voice mail. I left two messages, and wrote an urgent email, but then, I remembered my reporter training. I found the cell number for Dr. Julian Davies, one of the other consulting docs at the Center for Adoption Medicine, and I called it.

Dr. Davies asked me to forward the file, and we set up a consult for 3:00 that day. I arranged for a friend to pick up Bini at school and keep him, and tried to go about my day. I couldn’t, though.

I spent two hours in front of the computer, looking at Xiao-Jie’s picture, checking his measurements on the World Health Organization’s website, and researching cleft palate. I called the Cleft Palate Foundation in Chapel Hill, N.C., and spoke at length with a very kind woman whose name now escapes me. I followed links and more links and ended up nearly in despair about the what ifs. I signed up for a Yahoo group on cleft lip and palate. I went crazy with the waiting.

At 3:05, my cell phone rang. Dr. Davies was cautiously optimistic about Xiao-Jie, but told us that cleft palate in isolation can signal brain abnormalities and other complications. He gave us a list of questions to have answered by the orphanage: Did Xiao-Jie have pain or weakness in the legs? Are bladder and bowel functions normal? Did he have any markings (fatty lump, a hemangioma, a dark spot or deep dimple) on his spine?

We submitted the questions to Ashley, who told us what we already suspected: It was unlikely that we would receive a reply within the allotted 72 hours. We could accept the referral, and if the update came back signifying additional needs that we didn’t feel equipped for, we could change our minds. It was frowned upon, obviously, but it was an option.

Steve and I had decided not to tell anyone about Xiao-Jie yet — even Bini. I’d made the mistake of showing him one of the previous little boys, and he was very upset when we declined that referral. My dog, Kona, seemed to be catching our keyed-up vibe, and relieved herself all over the upstairs hallway. In fact, I was on the phone with Ashley while blotting one of five urine spots. Steve and I were united in our nervy excitement. All weekend, we’d lock eyes and, without a word, ask and answer: Are we going to do this?

Ashley was out of town on Sunday, and we had instructions to call Lindsey, another adoption coordinator in the China program, to give her our answer. At 11 a.m., I asked Steve one more time: Are we doing this? And then I made the call. Yes, we wanted to accept the referral. Yes, we wanted Xiao-Jie.

The next week was Thanksgiving, but still, we told no one. We went to a friend’s house for a big Thanksgiving party, and everyone there knew that we were trying to adopt again. Everyone asked us how it was going, but we both kept mum. I already loved Xiao-Jie, and I felt protective. And I think Steve and I both wanted this one so bad that we didn’t want to jinx it by saying it out loud.

On Dec. 1, we got the update from China. Dr. Davies reviewed it, and sent back this response: “Thanks for this … nice update on his development, with typical speech for his situation, felt to be smart. They have not noted any associated congenital anomalies here, but are describing absence of symptoms and typical function – when he gets home we may choose to do some screening imaging tests.” When he gets home.

Last night, I didn’t sleep downstairs, even though I was on Eggs duty this morning. I didn’t mind if Xiao-Jie, who we now call Evan, woke me up at dawn. At 5:30 on the dot, he appeared at my bedside in his footed puppy pajamas and said, “Mama.” Even though I was exhausted, I let that word — that one little word — sit inside my heart for a moment. I sent up a silent thank you to God, for listening to my pleas one year ago, and for allowing me to be Xiao-Jie’s Mama.